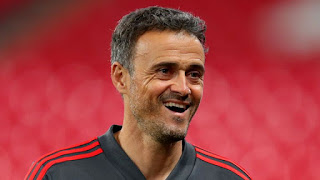 Lius Enrique step down from the role in June to take care of his nine year old daughter Xana who suffered from a bone Cancer, but unfortunately for him, his daughter did not survive the disease and she died in August.

The former Barcelona manager was replaced by his long term assistant Robert Moreno.

Moreno, who has guided Spain to  secure 2020 Euro qualification walked out of the Atletico metropolitan stadium in tears after their win on Monday knowing that his days with the Euro giant has come to an end as Lius Enrique is back and re- appointed as coach.

Moreno who was left disappointed at the decision is willing to leave the team immediately despite making it clear on September that he will happily step down as coach and return to his former position to being assistant coach if Enrique returns to the team. But it looks like he is going out of the club permanently.

This was confirmed by Spanish football federation president Lius Rubiales  who said that Moreno didn’t want to return to his former role as assistant coach as Soon as he realized that Enrique was back. So according to the president, the federation received a message from Robert Moreno who still hinted on his desire to leave the team.

The President went on to thank Moreno for his time with the team and wish him well.

Naomi Osaka wins US Open, Pulls out of French Open Due to Injury